50 Years Ago in Publishing: "The I Hate to Cook Book" 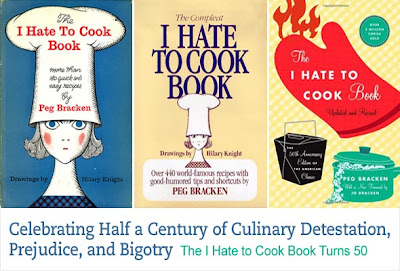 Excerpt:   Ms. Bracken was an advertising copywriter who, like other typical American mothers, was also tasked with preparing dinner for her family nearly every night. Fed up with the monotony of cooking, she quizzed her girlfriends — women equally bored with cooking the same meals over and over again — for their recipes and wrote a book.

She shopped the manuscript around to six male publishers, saw them each reject it and then found a female editor at Harcourt, Brace who loved it. After it was published in 1960, “The I Hate to Cook Book” became a smash hit, eventually selling more than three million copies.

The new edition is catching fire.

And a handful of Wisconsin libraries still have the 1960 edition in their collections.