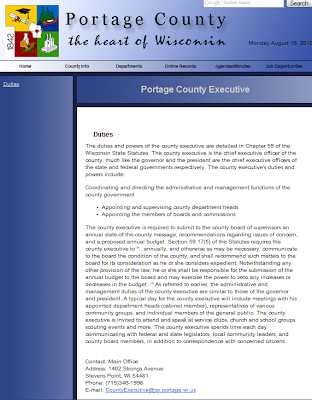 Excerpt: Shortly after taking office, Portage County Executive Patty Dreier said she wanted to change the way the county's annual budget is drafted, by getting county supervisors and department leaders talking about their needs earlier in the year.

Discussions didn't really pick up, however, until late last month, when she turned the budget planning process on its head.

Instead of telling all departments they had to keep growth flat next year or within 1 percent or 2 percent of 2010's spending levels, Dreier gave each department an individual "slice of the county's entire levy pie."

Dreier and Finance Director Jennifer Jossie came up with the allocations based on each department's budget history, size and needs, then compared that data with departments in similar counties. They also looked at whether the department could fulfill its mission through more cost-effective methods.