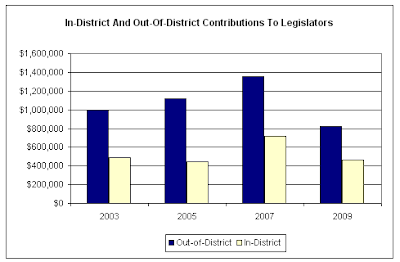 Source:  Wisconsin Democracy Campaign
Link to June 16 report.
Excerpt:  Legislators rely more on far-off, wealthy special interests to fund their election campaigns than on the people who can vote for them, according to a Wisconsin Democracy Campaign analysis that found legislators accepted $2 of every $3 from contributors outside their districts in 2009.
Legislators raised $1.29 million in contributions of $100 or more in 2009, including $823,915, or 64 percent, from individuals outside their legislative districts and $461,907, or 36 percent, from people who can vote for them.

With all due respect to the work of the Wisconsin Democracy Campaign, it's not unusual for individuals to make a contribution of, say, $100 to a candidate they support who doesn't represent their district.  Retiring Guy falls into this category.  Guess that makes him part of "this bunch".
Posted by Retiring Guy at 7:22 AM