Should They Stay or Should They Go? Wisconsin's Secretary of State and State Tresurer

Gubernatorial candidate Tom Barrett has proposed eliminating the offices of Secretary of State and State Treasurer as part of his 'Putting Madison on a Diet' Plan to save state taxpayers $1,100,000,000.  Annual estimated saving for this specific recommendations:  more than $1,000,000.

This proposal logically raises the question, What are the responsibilities of these two state offices.

Retiring Guy provides a basic overview with information cut and pasted from the State of Wisconsin website.

The Secretary of State is a member of the Board of Commissioners of Public Lands (BCPL).

These Wisconsin documents are among those preserved in the Office of the Secretary of State:

The state treasurer, a constitutional officer elected for a 4-year term by partisan ballot in the November general election, heads the Office of the State Treasurer and is the fiscal trustee for the State of Wisconsin.

The Office of the State Treasurer serves citizens and local government by providing for receipt, custody, oversight, and disbursement of moneys deposited by law with the state, as well as unclaimed property reported to the state. The office also administers the state’s Section 529 college savings program.

The State Treasurer is a member of the Board of Commissioners of Public Lands (BCPL). 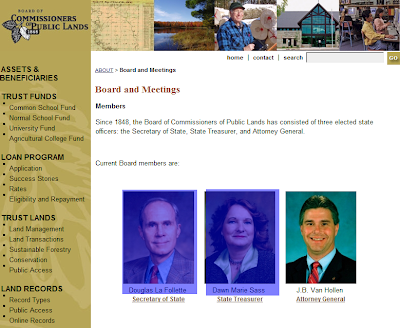 Those of us with a vested interest in the Common School Fund need to determine how this proposal would alter the authority of what is now a 3-member Board of Commissioners of Public Lands.
Posted by Retiring Guy at 9:13 AM