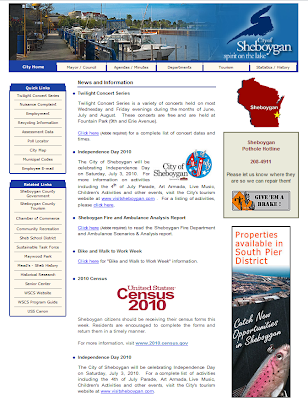 Excerpt: New hires for non-union municipal jobs in the City of Sheboygan would be required to start contributing toward their state-funded retirement programs under an ordinance endorsed Monday night by a Common Council committee.

If approved by the full Common Council next Tuesday, it would mean that new city employees who are not represented by a labor bargaining unit would contribute roughly 50 percent of the amount the city now pays into the Wisconsin State Retirement Fund. About 50 to 60 of the city's estimated 600 employees are non-union.

The city pays about $3 million a year into the State Retirement Fund. Currently, Sheboygan taxpayers pay both the city's portion and the employee's portion toward the fund; employees pay nothing. Officials said they're not sure how many municipalities around the state require workers to pay into their state retirement funds, but believe the number is few, if any.

Related story in today's (London) Daily Mail, "Will public sector pensions face axe? Review warns retirement funds may not be 'immune' from the cuts".
Posted by Retiring Guy at 6:32 AM