Although her books aren't exactly the liveliest titles on LINKcat library shelves. 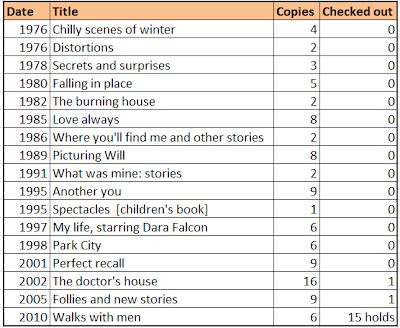 The LINKcat tally
(With 49 library locations)
Link to June 8 New York Times article, "A Reliving of a Time of Fame".
Excerpt:   Now 62, Ms. Beattie continues to write, and her characters, or many of them, have aged along with her: they have mortgages, children, divorces. She has published seven novels and eight collections of stories so far, and her newest book, her first in five years, a novella called “Walks With Men,” comes out from Scribner on Tuesday.

And yet, while not unknown, exactly, Ms. Beattie is hardly a household name anymore. When she is introduced at parties, she said recently, people sometimes ask, “Should I know who you are?” Just recently someone whipped out an iPhone and Googled her name while Ms. Beattie watched.
Link to Jay McInerney's review of Walk With Men.

Retiring Guy clearly remembers the critical buzz that settled over Beattie for awhile during the mid-1970s.  He read a few of her stories -- don't ask for titles -- and became neither a fan nor detractor.  Favorite author who started writing in the 1970s:  Richard Price.
Posted by Retiring Guy at 2:39 PM