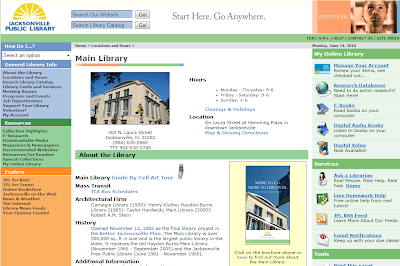 Excerpt: Tammy Owens, a literacy program specialist at Jacksonville’s Main Library, believes he can do it. Pickens became her student three or four years ago.

After he relearned how to read, write and spell, her library lab class became the place for him to work on reading comprehension.

A couple nights a week, Pickens works quietly at a computer station, scrawling notes as he works through lessons in high school history and science that a bullet blanked from his memory.

“He doesn’t need a GED because he has a high-school diploma,” Owens says. “I want him simply to be empowered. I want him to do better for himself, to get better at everything he does. ... I think he can do anything he sets his mind to. He’s just going to do it a little slower than the rest of us.”
Posted by Retiring Guy at 9:36 PM