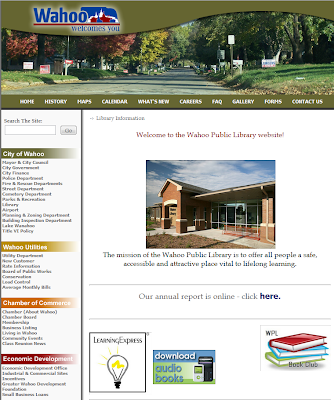 McClure, a longtime resident of Saunders County, wanted to draw attention to the Wahoo Public Library.

She created a mural depicting the building that housed the former library in the 1920s - City Hall.

The library board had given its stamp of approval.

Board member Rita Lindahl had a postcard of the old building.

She used a limited palette of just two colors of acrylic paint.

"Going with the same idea as a black and white photo," she said.

The 6-by-10 foot painting in a handmade frame was recently unveiled.

The library began through the efforts of the Wahoo Women's Club.