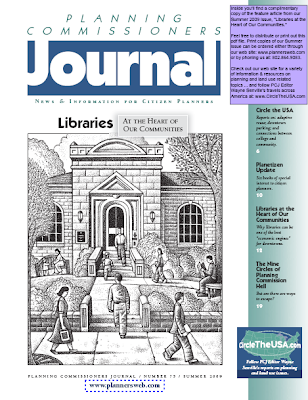 Libraires at the Heart of our Communities
(Read this article instead!)
Link to June 11 Guardian article, "Andrew Motion attacks 'catastrophic' plan for volunteers to run libraries".

Excerpt: Andrew Motion, the former poet laureate, has dismissed suggestions from consultancy KPMG that libraries are "not very much used" and should be run by volunteers as foolhardy, outlandish and potentially catastrophic.

A new report from KPMG into public sector reform says that "giving councils total freedom on libraries could mean that they create huge social value from engaging a community in running its own library, backed up with some modern technology, whilst also saving large amounts of money on over-skilled paid staff, poor use of space and unnecessary stock".

Maybe KPMG took the following paragraph from a Wikipedia article out of context.

Since the mid 1990’s, the declining trend in library usage has been well documented. With the rapid expansion of the internet to the general public, people began to seek answers in the quickest and most convenient way. Declining usage has been an issue both within and outside of the United States and has received considerable attention, especially over the last decade. While physical use may have been reasonably expected to decline in recent years due to the large scale shift to digital libraries and the increase in sources such as e-journals, the trend has appeared to be on a much larger scale. As the decline in library use remains somewhat of an ambiguous problem to solve, a large number of experts feel that library usage will continue its downward trend in the coming future until libraries can learn to adapt accordingly, if at all.[3]
Posted by Retiring Guy at 6:47 PM