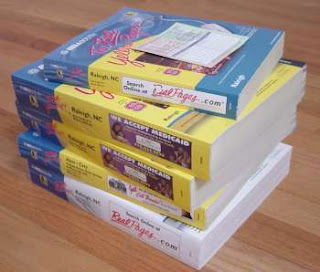 Link to May 8 New York Times article, "White Pages May Go the Way of the Rotary-Dialed Phone".

Excerpt: Verizon hopes that regulators will waive the requirement that it deliver White Pages to all New Yorkers before the end of the year, said John Bonomo, a company spokesman. He said he did not know how many copies of the White Pages were distributed annually, but said the total was in the millions in New York City alone.

James Denn, a spokesman for the state’s Public Service Commission, said that it had not received a similar petition from any other phone service provider.

Verizon has a similar request before regulators in New Jersey, Mr. Bonomo said. In some states, including Florida, Ohio, Oklahoma and Georgia, AT&T has already received approval to stop delivering White Pages to all residents.

But Mr. Cassel, whose group’s causes include reducing the production of unwanted telephone directories, said AT&T had withdrawn a proposal to end annual distribution in North Carolina after advocates for the elderly complained that some people might lose contact with friends and neighbors if they did not receive updated directories.

But we'll still be able to let our fingers do the walking through the yellow pages.