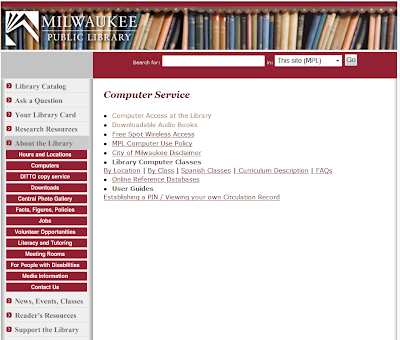 Excerpt: Seeking to bridge the digital divide, the Milwaukee Public Library is moving forward with a plan to bring almost 250 laptop computers into its branches in the city's poorest neighborhoods.

If federal stimulus funding is approved, the project would increase by nearly 65% the number of computers with Internet access for library patrons citywide.

Library Director Paula Kiely says the plan reflects the importance of offering computer access to residents who might not be able to get it anywhere else.

Whether you're trying to find a job or searching for information, "If you're not connected these days, you're missing out," Kiely says.

In a recent study of Internet access at libraries nationwide, researchers from the University of Washington wrote, "As the nation struggled through a historic recession, nearly one-third of the U.S. population over the age of 14 used library Internet computers and those in poverty relied on those resources even more.  . . . Internet access is now one of the most sought-after public library services, and it is used by nearly half of all visitors."
Posted by Retiring Guy at 7:39 AM