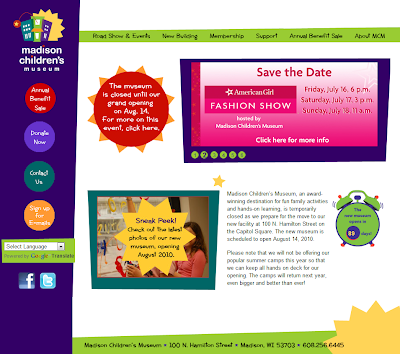 Excerpt: Kids from Dane County and beyond are in for a real treat later this summer when the Madison Children’s Museum opens in its new location on the north side of the Capitol Square.

I was given a preview of the creatively designed facility earlier this month and, to put it bluntly, I was blown away.

Between the work of Findorff construction, museum staff and 100 or so local artists and craftsmen, the 80-year-old building that was once a Montgomery Ward retail store and was later partitioned into dozens of offices has been turned into a delightful multi-story structure to combine learning and fun for children up to age 12. When it opens this August, it will be three times larger than the old museum on the other side of the Square, with room to grow even larger.

Ruth Shelly, the museum’s executive director, and Amy Mertz, its communications coordinator, met me at the authentic old world log cabin in the parking lot at the back of the building at 100 N. Hamilton St. The cabin, which was built in Walworth County around 1838, when Wisconsin was still a territory, was disassembled piece by piece and reassembled at the corner of North Hamilton and East Dayton streets, where it has already become a landmark that signals the museum’s location.

The cabin will serve as a focal point for a collaborative program that the Children’s Museum, the Madison school district and the Wisconsin Historical Society have designed to teach elementary school students about early Madison history.
Posted by Retiring Guy at 7:08 AM