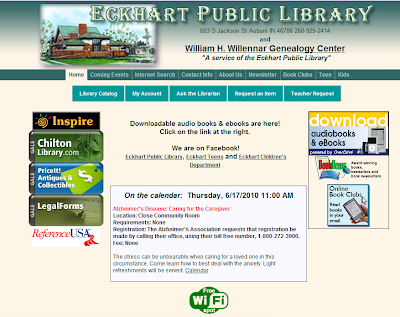 Link to May 23 Fort Wayne Journal-Gazette article, "Auburn library at 100".  (via Twitter)

Excerpt:   The earthy tones and original designs of the Eckhart Public Library’s stained-glass windows are a huge part of the 1910 building’s enduring appeal.

So when Janelle Graber heard glass shatter on her first day of work as the library’s director, she thought her tenure would be short.

“There was a crash, and you could tell a window had been broken,” she said. “I thought, ‘I’m going to be fired before I get started.’ ”

But the kids carelessly tossing a ball outside the library on Sept. 14, 1992, broke only an ordinary pane of glass – a relief to them and the library’s new director.

The library in Auburn has not only survived a century but has also thrived.
Posted by Retiring Guy at 1:17 PM