'This Week' Adds Fact-Checking to Its Agenda 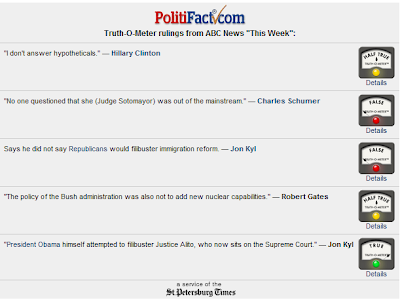 Excerpt:   The program is promoting an arrangement with the Web site PolitiFact.com whereby its editors apply its “Truth-O-Meter” — true, half true, false, “pants on fire!” — to the administration officials and lawmakers who are interviewed.  [Emphasis drolly added]

The fact checking, which started Sunday, stands in stark contrast to the he-said, she-said nature of most television chatfests, even though PolitiFact’s work takes place well after the facts and possible falsehoods are first uttered on TV. Both the Web site and ABC said that the checking is just an experiment, but it is already drawing attention online as a small measure of accountability for politicians and television interviewers.

Retiring Guy has to say he's less than dazzled by the first ruling on the graphic shown above:  a "half-truth" for Hillary Clinton's statement, "I don't answer hypotheticals".

OK, admit it.  You're only interested in the "pants on fire" stuff.
Posted by Retiring Guy at 2:40 PM