Maybe the Astrodome Could Be a Branch Library

Excerpt:   “Like a rapidly growing number of public libraries throughout the state and across the country that are facing significant budget reductions due to the downturn in the economy, HPL’s new service hours will better align the library within the city’s current economic environment," said Dr. Rhea Brown Lawson, director of the Houston Public Library.  [Emphasis added]

Is this the way it's supposed to work?

Additional excerpt from KHOU report.
The Houston Public Library is working with approximately $2.2 million less in its budget than it anticipated at the start of the 2010 fiscal year. As a direct result, it plans to reduce the service hours patrons can access library services from 70 hours per week to 51 hours per week. 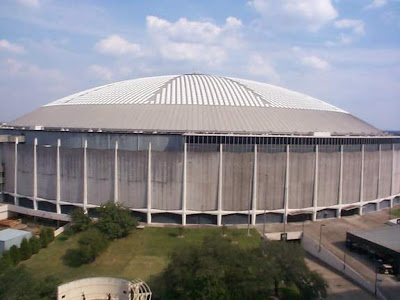 Excerpt: More than a decade after its professional football and baseball teams moved out, the Astrodome carries as much as $32 million in debt — nearly as much as the original cost of construction.

Harris County, which owns the stadium, projects that it will take another generation to complete the $48 million in debt and interest payments to get it off the books.

The debt is so complex and has been refinanced enough times that county financial managers disagree as to how much the county owes. A second estimate put the debt at $19 million.
Either way, local government is on the hook for millions of dollars a year in debt payments and operating costs for a stadium the city has deemed unfit for occupancy.

Debt and interest payments will amount to more than $2.4 million this year, according to a payment schedule for the higher debt estimate. The Astrodome's manager estimates it also will cost $2 million for insurance, maintenance, utilities and security.
Posted by Retiring Guy at 6:43 PM