In the Spotlight: Adam Mickiewicz Library and Dramatic Circle 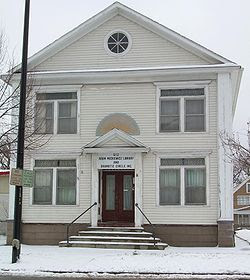 Link to April 22 Buffalo News article, "A glimpse of glamour at East Side library".

Excerpt:   Fans of glamorous Hollywood actress Vivica A. Fox barely caught a glimpse of her Wednesday before she slipped inside a trailer stationed in the small parking lot of Adam Mickiewicz Library and Dramatic Circle on Buffalo's East Side.

Fox, who arrived in Buffalo on Wednesday, will be in town for the next couple of days to shoot scenes for "Queen City," a new movie written and directed by Buffalo filmmaker Peter McGennis. In the movie, Fox plays a singer named Lady Midnight. The character is a composite of the great jazz and blues singers, including the late Dodo Greene, who reigned over Little Harlem, the Royal Arms and other clubs in the late 1970s and early 1980s. The interior of the Mickiewicz library is being used to stand in for a jazz club from the era.

From the Forgotten Buffalo website.
Located in Buffalo, New York's Historic Polonia District, the Adam Mickiewicz Library & Dramatic Circle, located at 612 Fillmore Ave is one of the most important cultural and ethnic landmarks in the city.

Named after Polish Poet and freedom fighter Adam Mickiewicz, the Dramatic Circle was organized and began producing amateur theatricals in 1895. The upstairs library contains over 4,000 volumes and over 400 hand-written scripts for Polish plays. Each year a number of performances are still presented as well as reading of Polish poetry.
Posted by Retiring Guy at 11:00 AM