No end to the sad and disturbing news. 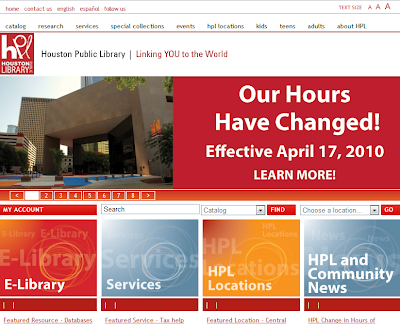 Excerpt:   While Houston is weathering the current recession far better than many American communities, it must still face some harsh realities when it comes to keeping the city afloat in the near term. With the city facing at least a $110 million budget shortfall over the next two years, Mayor Annise Parker has called for major belt-tightening on all fronts, even raising the possibility of layoffs and furloughs for city employees.

One of the most unkindest cuts of all is at the Houston Public Library system, where $2.2 million has been slashed from its 2010 budget of $39.3 million. As reported by the Chronicle's Allan Turner, the system is responding by closing most of its 42 branches on Saturdays, effective this weekend, shortening their hours from the current 71 to 51 per week. Only the downtown Central Library will be open on Sunday afternoons (though it will be closed on Fridays).
Posted by Retiring Guy at 10:11 PM