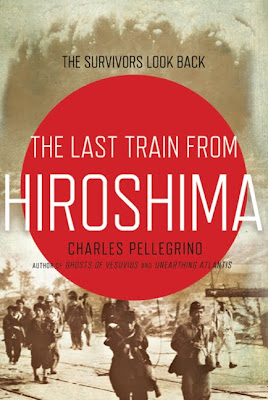 Excerpt: The New York Times reported last month that one of the book’s sources, Joseph Fuoco, described as a last-minute substitute flight engineer on one of the two planes that escorted the plane that dropped the bomb on Hiroshima, was an imposter. Mr. Fuoco, who died in 2008 at 84, has been discredited by scientists, historians, veterans and the family of the actual flight engineer.

Mr. Pellegrino admitted his mistake, saying he had been duped and would correct the book for future editions. But the publisher said it had continuing questions that Mr. Pellegrino did not answer satisfactorily.

Duped? Isn't the one of the cardinal rules of reportage to double-check and triple-check your sources?

["Oh, Retiring Guy, what century do you live in?"]

And then there's a question about the existence of a Father MacQuitty. (Wonder if Pellegrino watched A Night to Remember during the writing of Last Train?)

Oh, hey, check this out, folks, at Pellegrino's website. 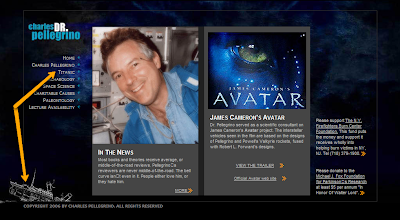 Pellegrino says, in essence, "I forgot".

....forgot to disclose in the book's acknowledgements that he had used a pseudonym for the priest, as the Times article reports.

Retiring Guy remembers when he heard this all-purpose excuse from his sons all the time.

And there's more. A question about the validity of Pellegrino's Ph.D.

Pellegrino said that the Victoria University of Wellington in New Zealand, which he lists on his Web site, charlespellegrino.com, as the institution where he earned his doctorate, had stripped him of his Ph.D. because of a disagreement over evolutionary theory.

But Barbara Marriott, the employment relations manager for Victoria said in an e-mail message that Mr. Pellegrino did not have a Ph.D. from the university. She said the university was investigating the situation.

Still on his resume. 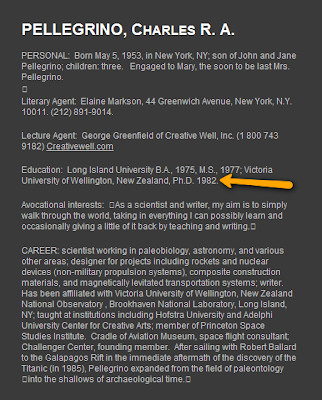