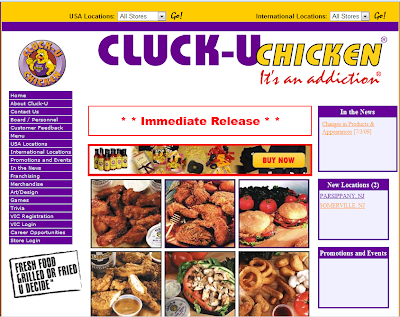 Cluck-U website
Link to March 22 Ad Week article, "Marketing 0.0: Promos on the cheap".
Excerpt: Weaving through the throngs of St. Patrick's Day revelers at the Hoboken, N.J., parade earlier this month was the usual turnout that you'd expect for an event like this -- local girls wearing green-beaded necklaces and green-tinted sunglasses, frat boys in green-felt top hats and tape-on leprechaun beards, and sturdy men stomping the asphalt in kilts. There was a lot of singing, of course, and a lot of beer. It was, in other words, a standard holiday turnout.

Then the big, yellow chicken showed up.

Actually, two big, yellow chickens -- man-sized fowl sewn from craft-store fur, complete with orange wattles and buggy eyes. Both birds wore breastplates that explained what coop they'd just flown from: Cluck-U, a local fried-chicken chain popular with the college crowd. The birds eased on down the sidewalk, high-fiving the kids -- who wasted no time begging their parents to take them to the restaurant. Later, long lines outside the Cluck-U near Second Street proved that the feathered ambassadors had done their job. "Twenty-five percent of what we bring in," says Cluck-U CEO J.P. Haddad, "is because of those chickens."
Retiring Guy understands why the chain is popular with the college crowd. The menu features an item called "breast bites" -- chicken tenders or chicken strips to the rest of us. Must be a Jersey thing.

Retiring Guy does not make this stuff up.