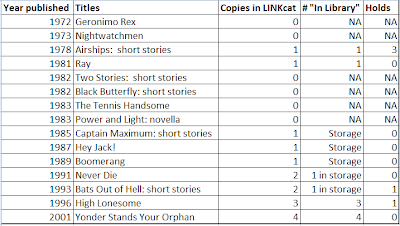 Excerpt: Hannah's first novel, ''Geronimo Rex,'' was published in 1972. It received the William Faulkner prize for writing and was nominated for a National Book Award. His 1996 short story collection, ''High Lonesome,'' was nominated for the Pulitzer Prize.

''Barry could somehow make the English sentence generous and unpredictable, yet still make wonderful sense, which for readers is thrilling,'' Ford said from his home in Maine. ''You never knew the source of the next word. But he seemed to command the short story form and the novel form and make those forms up newly for himself.''

''Barry was Mississippi's irreverent poet of the dark side, our rebellious, misfit uncle of the nightlife, the voice of the unrehearsed and the unapologetic outburst in corner of the room,'' White said Monday.
Posted by Retiring Guy at 9:21 AM