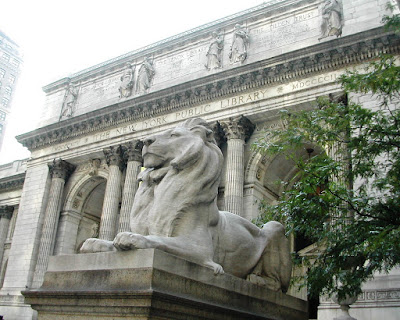 (Municipal funding "chopped".) Lean budget times have hit the New York Public Library in a big way. On Wednesday, the library announced it would reduce hours at two-thirds of its 87 locations in Manhattan and the Bronx and on Staten Island after having its financing from the city chopped by $5.9 million in the mayor’s latest round of budget cuts. Such a drastic move has not occurred since 2001.

(Loss of state aid.) The library was already facing a $900,000 drop in state aid. No employees will lose jobs, but the reduced services means a neighborhood branch will now be open an average 45 hours per week, down from just over 51 hours.

(New hours.) Every library will still be open at least six days a week, but five of the nine that kept Sunday hours will do so no longer. The new hours will kick in on Feb. 16; Sunday hours, or lack thereof, will start Feb. 21.

(More cuts likely.) “The unfortunate reality is that more cuts loom on the horizon, and unless there are substantial changes to city and state financial plans, we will be forced to make extremely difficult choices over the next two years,” the library’s president, Paul LeClerc, said in a statement.