Making the Rounds. A Brief History of Media Technology Scares 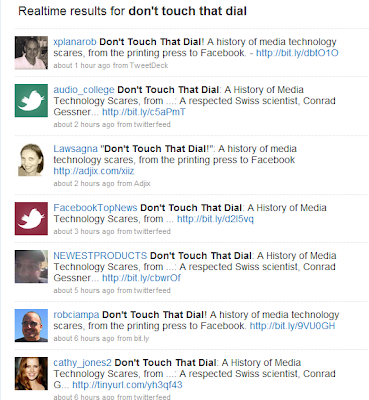 Excerpt: A respected Swiss scientist, Conrad Gessner, might have been the first to raise the alarm about the effects of information overload. In a landmark book, he described how the modern world overwhelmed people with data and that this overabundance was both "confusing and harmful" to the mind. The media now echo his concerns with reports on the unprecedented risks of living in an "always on" digital environment. It's worth noting that Gessner, for his part, never once used e-mail and was completely ignorant about computers. That's not because he was a technophobe but because he died in 1565. His warnings referred to the seemingly unmanageable flood of information unleashed by the printing press.

Worries about information overload are as old as information itself, with each generation reimagining the dangerous impacts of technology on mind and brain.

Not exactly what Retiring Guy was looking for, but its mockumentary style will do nicely.