DeForest: A Library at the Heart of Its Community 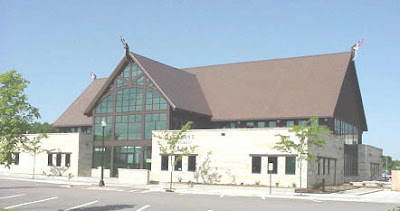 Upon its opening, the new library quickly became the hub of the downtown area, drawing more than 200,000 visitors through its doors each year.

Like the appearance of the library, from its cramped space in the strip mall north of the post office to its unique Scandinavian-style downtown centerpiece, the entire downtown district has put on a new face over the past decade. It’s almost hard to envision some of the dilapidated buildings and grain towers that once occupied the approximately four-block area which has been redeveloped into the bustling residential and commercial center of downtown DeForest.
And the library led the way.
Libraries at the Heart of Our Communities.
Posted by Retiring Guy at 11:31 AM