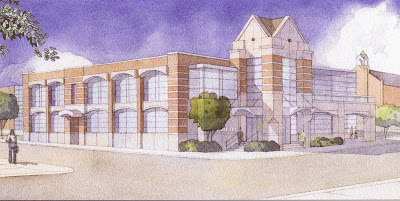 Excerpt: Warm hearts bested freezing temperatures and a half-foot of snow as two dozen braved the elements Friday to attend the groundbreaking for a $5 million Canonsburg library, slated to open in early 2011.

The proposed two-story building at Jefferson Avenue and Murdock Street has been on the planning board for at least 10 years, after the library board decided a new facility was needed to replace the crowded one in the borough building on East Pike Street.

But it wasn't until Canonsburg chocolate magnates Frank and Athena Sarris [OMG, a peanut butter meltaway pie!] donated $1.5 million for the library's construction that the project picked up steam. Another $1 million earmarked by the state for construction plus an additional $100,000 in state money for land acquisition boosted the momentum to realizing the library board's long-sought goal.