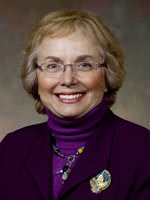 Excerpt: Longtime state Senator and former Senate leader Judy Robson said today she will not seek re-election - the third senator to do so this month.

Robson, 70, was the second woman to serve as the Senate Majority Leader and the first Democratic woman to do so. A retired registered nurse, Robson focused much of her work as a lawmaker on health care issues such as the BadgerCare Plus expansion of state medical coverage for the poor.

"As a legislative leader, I sought to make the Legislature more civil, ethical and open to citizens. It was an exhilarating experience," Robson said in a statement.

Congratulations to Sen. Robson on her distinguished career in the state legislature.
Posted by Retiring Guy at 10:12 AM