And emotion trumps intellect, in some cases. 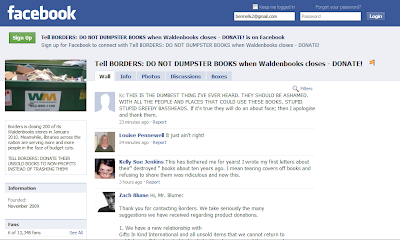 Tell BORDERS: DO NOT DUMPSTER BOOKS when Waldenbooks closes - DONATE!

A Borders' employee responds to the HuffPost in a January 7 Reading and Writing/No Arithmetic blogpost.

Excerpt: Let’s start with the headline: Why Won’t Borders Donate Their Soon-to-be-Trashed Books? I’ll be happy to answer this question: because they’re not ours to donate. They belong to the publishers, not to Borders, and if anybody is going to be donating anything, it will be the publishers, not the booksellers.

Erik Ose then starts his post by saying that many Waldenbooks will be closing and many of the unsold books will be trashed. The good-hearted employees have started a Facebook campaign to have the books donated instead of thrown away.

For anyone who doesn’t know about the inner workings of bookstores, this sounds like Waldenbooks is going to throw away ALL their unsold books, including hardcovers and trade paperbacks. It also sounds like the trashing of these books is something occasioned by the closing of numerous Walden locations at one time, none of which is true.

We’re in the seventh paragraph before he mentions that this is standard practice at all booksellers, not just Borders, and that in fact this is not a result of the closing of an unusually large number of bookstores. We’re still under the impression that all books, not just mass markets, are dumpstered, and in fact this impression is never corrected. He does reveal that 30-40% of books are returned and that 65-95% of those are pulped by the publisher, something that has little bearing on the discussion at hand, which is the fate of mass market books. The fact that publishers destroy 65-95% of the other books that are physically returned to them is another story.

Mr. Ose then explains (finally, in the eleventh paragraph) the reason behind this practice: shipping the books back costs more than they’re worth. (As an aside, I could argue this point, but never mind.) Then he goes on about how awareness needs to be raised (I’m all for that) if this practice is ever going to be changed, etc. No argument from me there.
Posted by Retiring Guy at 6:21 PM