Online Book Piracy: One Things Leads to Another 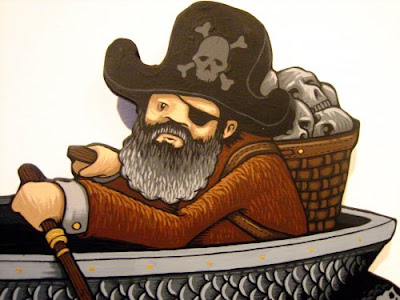 Excerpt: Publishers could be losing out on as much as $3 billion to online book piracy, a new report released today by Attributor estimates. Attributor, whose FairShare Guardian service monitors the Web for illegally posted content, tracked 913 books in 14 subjects in the final quarter of 2009 and estimated that more than 9 million copies of books were illegally downloaded from the 25 sites it tracked. Although Attributor needs to make some projections to arrive at total numbers, the hard figures the survey uncovered are disturbing to any publisher worried about the possible impact of piracy of e-books.


Then Eric Hellman provided this riff on the story in a January 18 Go To Hellman blogpost, "Online book 'lending' costs U.S. Publishers Nearly $1 Trillion", which is being shared all over the place via Twitter today.

Excerpt: Hot on the heels of the story in Publisher's Weekly that "publishers could be losing out on as much $3 billion to online book piracy" comes a sudden realization of a much larger threat to the viability of the book industry. Apparently, over 2 billion books were "loaned" last year by a cabal of organizations found in nearly every American city and town. Using the same advanced projective mathematics used in the study cited by Publishers Weekly, Go To Hellman has computed that publishers could be losing sales opportunities totaling over $100 Billion per year, losses which extend back to at least the year 2000. These lost sales dwarf the online piracy reported yesterday, and indeed, even the global book publishing business itself.

From what we've been able to piece together, the book "lending" takes place in "libraries". On entering one of these dens, patrons may view a dazzling array of books, periodicals, even CDs and DVDs, all available to anyone willing to disclose valuable personal information in exchange for a "card". But there is an ominous silence pervading these ersatz sanctuaries, enforced by the stern demeanor of staff and the glares of other patrons. Although there's no admission charge and it doesn't cost anything to borrow a book, there's always the threat of an onerous overdue bill for the hapless borrower who forgets to continue the cycle of not paying for copyrighted material.


Now for some background.

Here's an article from the July 26, 2009, New York Times on Attributor: "Start-Up Plans to Make Journalism Pirates Pay Up".

Excerpt: A start-up called Attributor, based in Redwood City, Calif., is proposing an approach that is more carrot than stick. It has developed an automated way for newspapers to share in the advertising revenue from even the tiniest sites that copy their articles. The plan faces many technical and legal hurdles. Attributor wants to take some of the ad money that would have been paid to the pirate site and give it to the copyright owner instead. To do that it needs the cooperation of big advertising networks like those run by Google and Yahoo. So far those companies have reacted coolly to the proposal. Still, Attributor has been able to attract many major publishing companies to what it calls the Fair Syndication Consortium, which is exploring its ideas. These include The New York Times Company, the Washington Post Company, Hearst, Reuters, Media News Group, McClatchy and Condé Nast. The Attributor plan “seems to me to be a way to bring order out of the chaos,” said Chris Ahearn, president of Reuters Media.
Posted by Retiring Guy at 12:54 PM