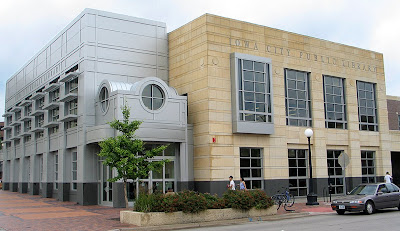 Excerpt: Police last month charged an Iowa City resident with the theft of 53 DVDs from the public library.
It could take weeks or months before the library sees those movies or the $1,360 they are valued at, police said. However, library director Susan Craig said the library won't be changing the policy that allows residents to check out so many materials in the first place because thefts are rare.

Craig said the library's policy is to allow 75 items to be checked out on one card. However, there are limits on certain collections that have expensive items, such as art pieces and video games, Craig said.

Although 75 items might seem like a lot for one person, it's actually not that much for an entity such as a daycare, Craig said. Additionally, there are logistics issues associated with setting a limit too low, Craig said. A higher limit means library staff doesn't have to worry about checking items in as soon as they are dropped off to allow patrons continued library usage.
Posted by Retiring Guy at 9:01 AM