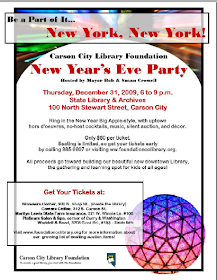 Although it will draw on a New York atmosphere, the true appeal is the time difference, according to organizer Phyllis Patton.

“We felt there was a group of people out there who did not enjoy going out to casinos and partying all night,” said Patton, chairwoman of the library foundation. “In New York, it's all over and done with by 9 o'clock (Pacific time).”
Retiring Guy at 8:31 PM