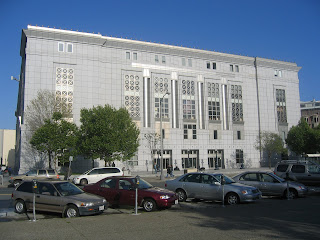 Excerpt: Yet, while the need for libraries is ever more critical, libraries across the country are facing significant cutbacks. From Cleveland to Phoenix, Philadelphia to Seattle, major urban libraries are facing severe reductions in funding, resulting in fewer open hours and reduced services.

San Francisco is bucking the national trend of diminished funding and services thanks to a budget set-aside, which received overwhelming approval by voters in 2007, and substantial progress on the largest capital improvement program in the history of the city's library.

The payback for San Franciscans' support of libraries is huge. When a renovated branch library opens, the number of new library card holders at that branch increases an average of 149 percent and visits to libraries increase by a whopping 42percent. This year the library is on track to set a record in the number of visitors and materials borrowed with more than 6 million visitors checking out 8 million items. Access to technology is also impressive: 16 million hits to the San Francisco Public Library Web sites in English, Chinese and Spanish and almost a million public computer sessions in 2008.
Posted by Retiring Guy at 11:53 AM