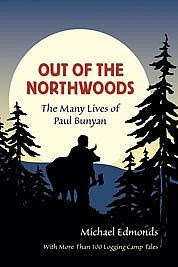 Excerpt: The identity of the person who told the first tall tale of Paul Bunyan may never be known.

According to author Michael Edmonds, one things is certain, though, and that is the stories were dreamt up in the early 1880s in the logging camps of northern Wisconsin - a few miles north of Tomahawk to be exact.

Edmonds, the head of digital collections and Web services at the Wisconsin Historical Society in Madison, released his book "Out of the Northwoods: The Many Lives of Paul Bunyan" in early October, a book he said is meant to dispel any common misconceptions about the origins of Bunyan.

"Some people will say 'Oh, Paul Bunyan, that started in Minnesota,' " said Edmonds. "But, it didn't.

"(The tales) are not tied to any particular location, but Paul Bunyan as a character, I'm confident, was invented in the Wisconsin River Valley in the 1880s and quickly spread from there elsewhere."
Posted by Retiring Guy at 9:26 AM

Labels: Michael Edmonds, Out of the Northwoods, Paul Bunyan