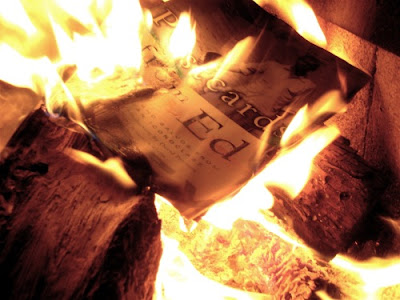 Not the fate of Der Fuhrer's 16,000-volume library
Link to A Blog About History post, " Hitler's Secret Library". (via Lazyfeed)

Excerpt: He ranked Don Quixote, along with Robinson Crusoe, Uncle Tom’s Cabin and Gulliver’s Travels, among the great works of world literature. “Each of them is a grandiose idea unto itself,” he said. In Robinson Crusoe he perceived “the development of the entire history of mankind”. Don Quixote captured “ingeniously” the end of an era. He was especially impressed by Gustave Doré’s depictions of Cervantes’s delusion-plagued hero.
Posted by Retiring Guy at 9:32 PM