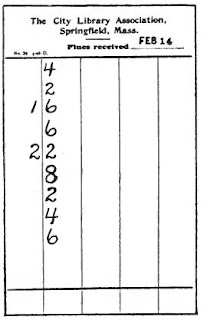 Excerpt: Edwards said she wasn't overly concerned about the notices until she got the summons to appear in municipal court. She dropped off the book on July 8, the same day as her court appearance, but did not attend the court hearing.

Julson recalls going to the police department that day and telling police the books were back, but Wellumson does not remember that.

"When she did not appear in court and we hadn't heard anything from her (Edwards), it eventually goes to warrant, which it did in this case," Wellumson said. "The municipal court is usually very flexible in meeting people's needs. We don't want people to go to jail."

Wellumson, who stressed the arrest warrant was for failure to appear in court and not about the books, had no explanation about the length of time between the return of the books in July and the warrant being issued on Oct. 14, saying the citation was being enforced, and simply returning the missing items did not address the issue.
Posted by Retiring Guy at 1:34 PM