Recommended Reading (And Not Just for Guys) 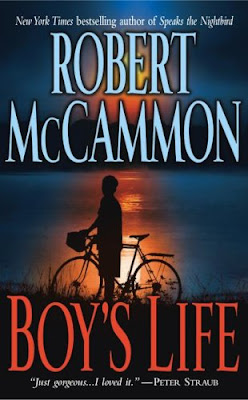 Link to September 22 Guys Lit Wire post by Steve Berman, "Echoes of Bradbury and the summers we all miss".

Excerpt: When I want to become younger, a boy again, there are a few books on my shelf that transform me, take me back to an age when I believed anything could happen. Boy's Life by Robert McCammon is one of them.

Although McCammon's Gone South (1992) is my favorite book -- always duking it out for supremacy with A Confederacy of Dunces, both set in Louisiana -- I hold the same special fondness for Boy's Life (1990) that Berman does. While reading this book, I simultaneously relived my own summer of 1964 in Warren, Pennsylvania. Very evocative.

When McCammon announced, shortly after the publication of Gone South, that he was taking a break from writing to rest and spend time with his family, I felt abandoned, heartbroken, confused. I'd been so eager to discover where he was going next. Turns out to have been Speaks the Nightbird, which, I guess you could say, I've boycotted since its publication in 2002.

The best of the rest: Mine and They Thirst. The only time in my life I experienced nightmares was while reading They Thirst. (Can't believe the book's never been made into a movie.)
Posted by Retiring Guy at 4:17 PM