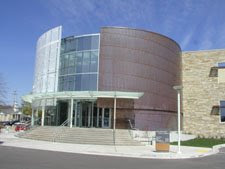 Excerpt:
A $22 million expansion of Waukesha County's main library likely will be put on hold to take pressure off the city's growing debt, Jane Ameel, director of the Waukesha Public Library, said Monday.

Plans had called for expanding the downtown library to 94,000 square feet over two phases by 2014. The expansion proposal is on the long-range borrowing plan for capital improvements.